How did Colonialism Take Root?

In the previous article, we explained that Lapu Lapu, the first national hero of the Philippines, fought against the Spanish. If colonialism were so bad, why did’t the rest of the natives surrender to the colonizers who only numbered a few hundred?

The colonizers came with advanced technologies and useful goods that were coveted by the natives. For example, Pigafetta writes that the Spanish explorers to the Philippines exchanged their tools for much-needed food:

One of the natives brought us about a porringer full of rice and also 10 bananas fastened together to barter them for a knife which at the most was worth 3 catrini. Magellan saw that that native cared only for knives, called him to look at other things. He put his hand in his purse and wished to give him one real for those things, but the native refused it. Magellan showed him a ducado but he would not accept that either. Finally, Magellan tried to give him a doppione worth two ducados, but he would take only a knife, so Magellan gave him one. 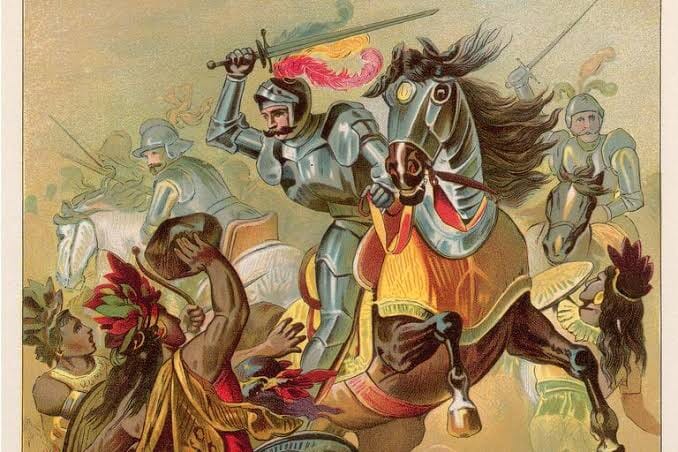 They also introduced European medicines which were able to cure a native who was terminally ill:

Jovan Carvaio and the constable returned. They told us that they saw the man who had been cured by a miracle.

Lastly, alliances with the Europeans were the key for the native opposition to get in power against the native ruling class.

Then the Moro merchant said to the king "Cata raia chita" that is to say, “Look well, sire.” “These men are the same who have conquered Calicut, Malaca, and all India. If they are treated well, they will give good treatment, but if they are treated evil, evil and worse treatment, as they have done to Calicut and Malaca.” The interpreter understood it all and told the king that the Spanish king was more powerful than the king of Portugal, that he was the king of Spain and emperor of all the Christians, and that if the king did not care to be his friend he would next time send so many men that they would destroy him.

Other than the Indians and Chinese, most native countries were not only ignorant of science and technology, but also lazy and unproductive.

But Raha Colambu.. asked Magellan to wait two days until he should have his rice harvested, and other trifles attended to and to send him some men to help him, so that it might be done faster.. Magellan sent him some men, but the kings ate and drank so much that they slept all day. Some said to excuse them that they were slightly sick. Our men did nothing on that day, but they worked the next two days.

The Disadvantages from Colonial Rule Outweigh the Initial Benefits

The benefits that natives get from colonialism are only felt in the beginning. After some time, the disadvantages start to outnumber the advantages as more freedoms are lost gradually and the friendship is replaced by coercion.

This is similar to a marriage that feels rosy and exciting in the beginning, but degenerates into abuse and conflict afterwards.

This is also similar to the capitalist system where new goods at low prices are introduced, creating a massive benefit. Gradually, monopoly is gained and the prices are increased until the new system becomes worse than the old one.

In the Philippines, this is seen in the power industry where foreign investments solved the brownouts of 1989-1991. However, this caused electricity prices to rise to become among the highest in Asia.

In another example, a foreign investor might invest a lot of money which will raise wages and allow a local worker to raise four children instead of the usual two (had there been no foreign investor). Another country will see this and will offer even lower wages. This will then make the foreign investor move to that country, leaving its former workers with a lifestyle that is not maintainable by the natural economy of his country.

The proper solution is to use foreign investments to build up local industries through trade and technology transfer. In this way, there is mutual benefit between locals and foreigners, without sacrificing the sovereignty of the former.

This was actually done by Meiji Japan which opened up to the United States without surrendering its sovereignty. It took the long hard path of studying Dutch and English books on science until they could make their own machines after around 40 years. They bought American goods and figured out how to make them themselves.

Currently, this is being done by China which started this policy in the 1980s under Deng Xiaoping. The Chinese try to make Western goods by themselves, starting with low quality ones then gradually rising up to advanced manufacturing. Their major difference is that they are accused of skipping technology transfer by resorting stealing technology directly.

This is why the raising of native intellectual and moral levels is a key feature of Maharlikanism. This manifests as the virtues of Talino and Puso making up our proposed Consitutional Virtues* for the Philippines.

*Though intellect seems to have been lacking even in Maharlika (as proven by Pigafetta and Chau Ju Kua), morals were not.

*Our solution to biletaral disputes between countries is similar to our solution to divorce–prevention is better than cure. The best marriages are preceded by long friendship based on similarity of values and life-goals. This principle is applied to nations with each country defining their own Constitutional Virtues which are then matched to those of others.

Superphysics
Back to Was-lapu-lapu-tausug?
Next Demands of the KKK