How it is Similar to the 2008 Financial Crisis

In 1772, a credit crisis originating in London hit and spread over Europe and affected the American colonies.

The cause was the creation and over-circulation of bounced checks then known as redrawn bills of exchange. Speculators used these bills to gamble with bank money and the deposits of other people. The end result was a loss of capital, creating a credit crunch, which led to an economic downturn hitting Europe and too-big-to-fail companies. One of them was the East India Company which had to be bailed out with taxpayer money, specifically from the tea trade.

Sound familiar? This is because the Credit Crisis of 1772 was essentially the same as the Credit Crunch of 2008 and even similar to the 1997 Asian Financial Crisis. Both were caused by the overtrading by speculators and both given the wrong solutions:

The debtors of such a bank..were likely..chimerical projectors, the drawers and re-drawers of circulating bills of exchange, who would employ the money in extravagant undertakings..

Since the solutions did not address the root causes, more problems emerged. The Tea Act angered colonists, helping fuel the American Revolution, leading to the loss of the American colonies for Britain. The Asian Crisis led to protests which caused politicians to get replaced. TARP andquantitative easing created the huge but unproductive American debt without increasing GDP, in a phenomenon known assecular stagnation.

The QE solution is bit unique because it is arbitrary. Unlike the 1773 Tea Act which took money from the colonies and the IMF bailouts which come from its member countries, the money from QE is just created arbitrarily. While the sourcing of funds for the first two are felt immediately by the suppliers of those funds, the effects of QE have a long delay. The pain from the Tea Act and IMF bailouts created instant protests, but the pain from QE will be felt by the later generations – those who did not cause the problem. An easy proof is Japan which has been doing QE since the 90s and now has a huge public debt for little gain.

Such improvident anticipations gave birth to the more ruinous practice of perpetual funding. This practice puts off the liberation of the public revenue from a fixed period to an indefinite period, never likely to come. However, it raises more money than the old practice of anticipation. When men became familiar with funding, it became universally preferred to anticipation during great state exigencies. Relieving the present exigency is always the object of government. The future liberation of the public revenue they leave to the care of posterity. 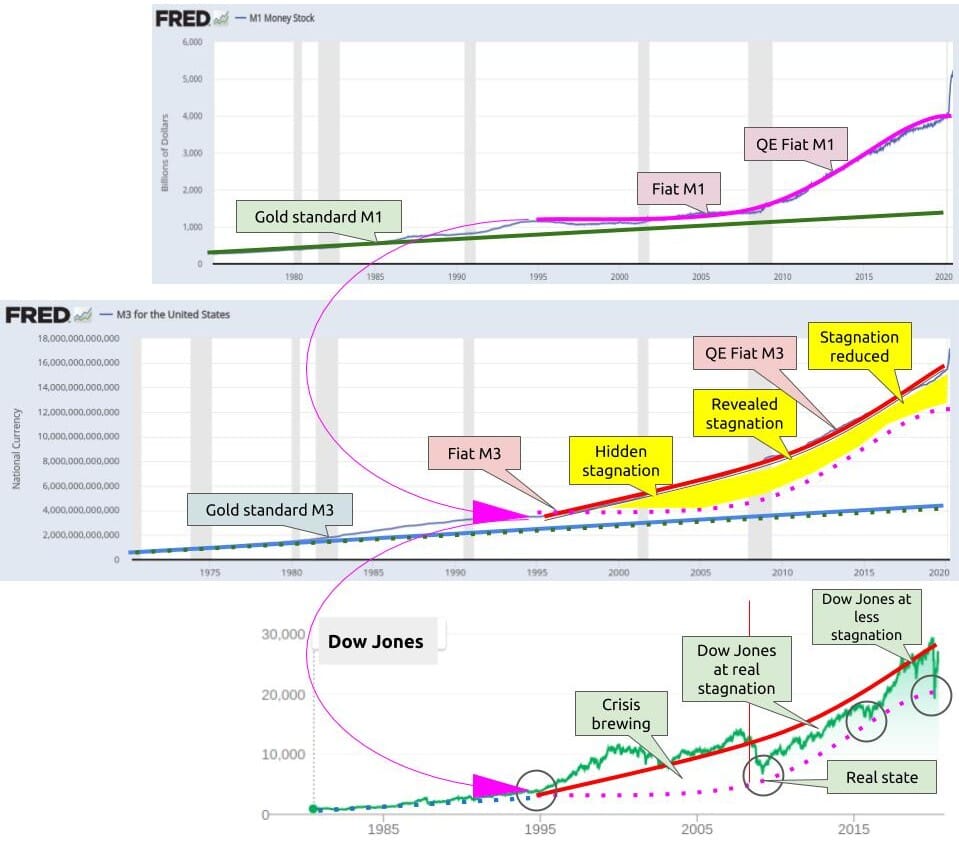 QE gives money to the banking system in order to mobilize productive labor, as a consequence of Keynes’ idea of liquidity preference. However, because of the doctrine of profit maximization, this money is used instead to raise asset prices for resale (akin to converting cheap liquid money into an expensive, solid abstract treasure) and not for giving it to society to produce something real and concrete. Thus, profit maximization greatly increases M3 without increasing M1 through three waves:

Inflation is also not so much affected because the Consumer Price Index (CPI) is based on things bought by ordinary people. The purchases of factories, businesses, and blue-chip stocks are not included in the CPI’s “basket of goods”. This lack of inflation and employment then prompts central bankers to further increase M3, leading to more inequality through wage-earning working for free without them knowing it. This then results with the dealers having so much more economic power, through their abstract treasure, than consumers.

Sooner or later, the inequality becomes unbearable and people begin to riot and rebel when the people have to pay for that very inequality. The 1772 Credit Crunch led to new taxation that made the Americans revolt. The Asian Crisis led to devaluation which raised the prices of imports, causing Asian countries to revolt. In the US, the inequality from QE leads to high costs of education, rent, and healthcare which raise the incidence of protests and even riots.

The recurrence of financial crises is rooted in the profit maximization doctrine, which is a moral issue at its core. This is why the solution to a banker’s crisis can never be ultimately solved by the banker nor by any monetary policy. Instead, it is solved by fiscal and regulatory policies such as anti-trust and structural reform. In afuture post, we shall explain the proper solution to financial crises, as explained by Adam Smith, a moral philosopher.

Superphysics
Back to Effort Theory of Value
Next why QE failed