How Vaccine Prices Expose it

The inelastic supply curve is the child-idea of the sophistry called the Equilibrium Theory of Economics. It manifests as a vertical line that says* that an essential, but hard-to-produce product can command whatever price its supplier wants.

If the amount supplied is perfectly fixed, as in perishable fish for sale at whatever price, we face the perfectly inelastic supply. Samuelson, Economics, Chapter 20: Determination Of Price By Supply And Demand

All Economics books use the auction scenario to justify both the upward-sloping and the vertical inelastic supply curve.

The problem is that there is only one seller in an auction as the auctioneer that makes the buyers, as bidders, fight each other. In reality, a normal market is the other way around – the sellers fight each other to find buyers. A easy proof is the exsitence of sales, marketing, branding, advertising, and loyalty programs that entice buyers to gravitate towards specific sellers. 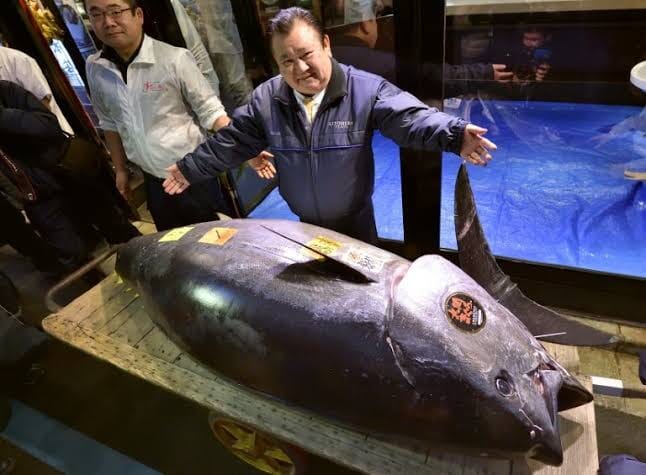 This shows that Economics teaches its students to make monopolistic selling as the natural state. This then helps explain why prices keep on rising even if technological advancement is supposed to reduce prices and make life less stressful.

The Pandemic Helps Us Expose the Sophistry

The Covid outbreak gives us an excellent opportunity to see the sophistry of the perfectly inelastic supply curve of vaccines because: 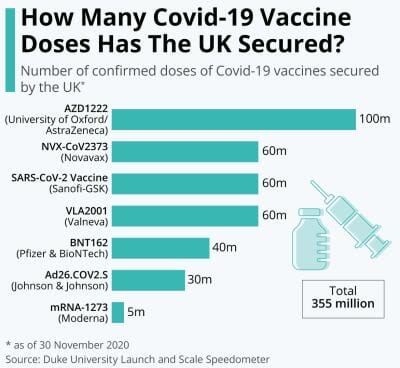 First, let’s create a scatterplot for the prices and quantity supplied for Britain and get the trend. This creates a downward-sloping supply curve, consistent with Pantrynomics: 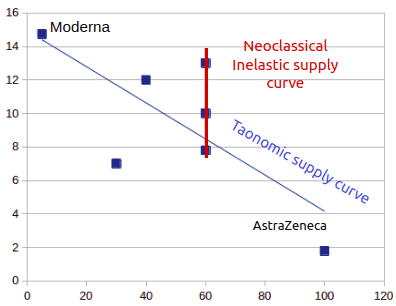 However, it also shows that there are three makers selling 60,000 doses at varying prices. These three, representing around 50% of the supply, match the ‘perfectly inelastic supply curve’ of Economics. Thus, we can say that in this natural, real-world example:

This 50% truth of Economics is what Adam Smith says of the Commercial or Mercantile system –the businessmen and merchants take half-truths and then impose that as the truth onto everyone.

The Simple Wealth Of Nations, Book 4

To see if this pattern is replicable, we check out the supply curve of vaccines for Belgium: 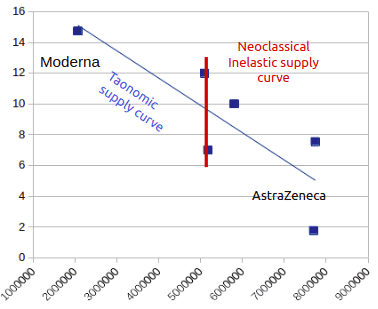 We see the same pattern of a downward-sloping supply curve, as well as an ‘inelastic’ supply curve for around 40% of the supply.

What About the Actual Supply? 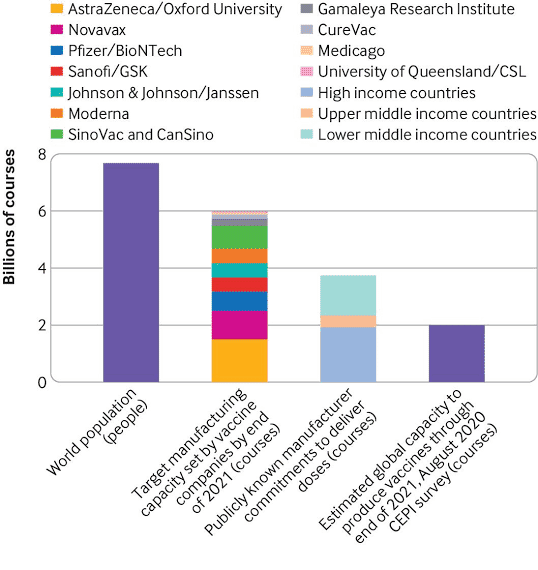 We see below that it slopes downward, with Astra Zeneca, the cheapest vaccine, being produced the most. Moderna, the most expensive, is among those produced the least. The biggest productions are those of AstraZeneca and Novavax, both made by the Serum Institute of India which is the world’s largest vaccine-maker which focuses on low cost.

Thus, the pure supply curve in reality matches Pantrynomics and not Economics. Less than 40% of the supply matches the perfectly inelastic supply curve of Economics, making it less than a half-truth. Shall we say it’s a 40%-truth? 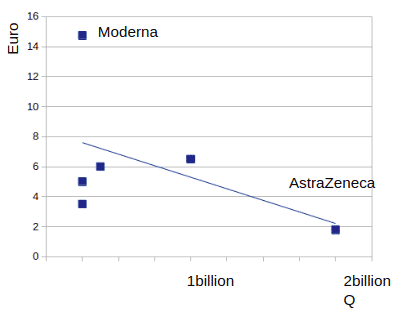 Combining the actual supply with the actual demand by Britain and Belgium as representatives, we can come up with a real-life supply and demand curve which matches that of Pantrynomics: 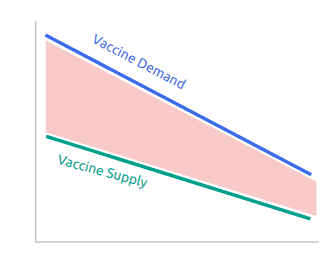 The supply shows a consistent shortage and clearly slopes downward, different from the assertion of modern Economics. The only solution to make the supply curve shift to the right, and quench all the demand, is to open-source the technology and production techniques so that supply can be increased at a lower cost in order to meet the demand and save lives. However, this would go against the profit-maximization motive taught by Economics which prefers money over life, as explained by Samuelson:

When the rich man's dog gets the milk that the poor man's child needs to avoid rickets, is the system working badly? No. It is working as it is designed to do - putting goods in the hands of those with the most money or dollar votes. Paul Samuelson, Economics

The Sinister Effect of the Supply Curve of Economics: Wars and Crises

Economics teachers are unaware that, by teaching the Equilibrium theory, they are actually teaching selfishness and evil*. The only way for the upward-sloping supply curve to exist in our example is to remove the existence of AstraZeneca-Oxford and the Serum Institute with its high production. Only when we get rid of government and all forms of socially-minded production can the models of Economics exist.

*If badness is the lack of fellow feeling with others, then evil is the the total lack of such feeling

The curves of Economics above show themselves when all the low-cost and not-for-profit producers are removed from the system. We then work with this pattern backwards to expose the unseen sinister effect of Economics which teaches selfishness.

The upward-sloping supply curve was formalized in the 1870’s as the Marginal Revolution in:

According to this pattern, it would slowly and insensibly sap away benevolence, and instill selfishness as time passes. Sooner or later, this pent-up selfishness would explode into a crisis. And that’s exactly what happened as World War I which involved:

Those countries which seeded the Marginal Revolution, eventually reaped World War I as their karma. Both Economics and this selfishness were left unchecked and so they naturally led to World War II, as the second round of karma-crisis involving:

However, it might seem absurd to blame Economics as the cause of World Wars. Economics has spread around the world through APEC, NAFTA, and the WTO, yet where is World War III?

In reality, the formalization of its curves came as an effect of a wave of selfishness that seemed to spread in Europe, as well as Japan, during the late 19th century. It would be like a greed virus that started silently spreading from the 1870’s in Europe and Asia that started killing its hosts by 1917 through war.

When you are infected by a virus, you act abnormally, coughing or sweating beyond your control. Similarly, the humans infected by the greed virus find themselves killing others for land and property, and gambling in stocks and commodities leading to a crash.

Therefore, while it is true that there has been no World War III (the non-nuclear Cold War isn’t it), the lethality of the greed virus manifested instead as:

The miniscule effect of the Panics of the 1890s are nowhere near the damage inflicted by those crises.

It took two key elements to reveal this truth about Economics: the internet and a pandemic.

Without these, prices would have been kept secret and there would be no data to disprove the most fundamental models of Neoclassical Economics. Taoist tradition encourages people to see the positive in the negative, and we can say that this is one of the positive revalations to come from the pandemic.

However, the upward-sloping supply curve of Economics is only prevented by the existence of the cheap Astra Zeneca vaccines from Britain and India. The rest of the suppliers are still working under selfish-interest. This clearly means that the greed virus is still out there working behind the scenes to create the current crisis, as well as ensure future ones. This sureness is actually how we were able to predict the current crisis .

We have workarounds, such as our proposed Moneyless Banking , Pantry World Trade , and Points-based Taxation . However, the most lasting solution or antidote is to teach and practice fellow-feeling, as espoused by Adam Smith. This is actually imbued in Pantrynomics , most fundamentally in our downward-sloping supply curve.

In the next post, we shall see another sophistry created by economists as the producer’s and consumer’s surplus

Superphysics
Back to supply-demand fallacy
Next producers-consumers-surplus