Universal Basic Income (UBI) became popular in 2016 after it was adopted by a few Western countries.

In UBI, money is given to poor people without any strings attached. This makes it a bit different from Conditional Cash Transfers (CCT) which imposes conditions that the poor must meet.

In general, studies have found two flaws in UBI:

Adam Smith, the founder of Economics, would be against UBI because:

Development banks want UBI for them to find use for their idle money which is of no value when not circulating. UBI is an easy sign that the profits in lending are very low, that banks have to find radically new business models.

Governments of democratic countries like Brazil and the Philippines want it because it lets them placate the poor and prevent public disobedience or the rise of Communism or terrorism. Unofficially, it helps politicians buy votes. The abandonment of UBI in Finland and Bolsa Familia in Brazil are proofs that UBI is not sustainable.

Smith would rather be in favor of microfinance which are small loans, usually given to poor people to start a micro-business or cooperative.

Loans are supposed to serve as one’s capital, and thus, are not supposed to be spent recklessly as an expense. A capital pays for itself, but an expense does not.

There are generally two problems with microfinance, one with supply and another with demand:

Pantrynomics introduces the concept of pointization or the conversion of economic value into points which are pegged to grains. These points are created whenever there is an agreement by two parties.

Thus, the points are not created by any bank, but by the people themselves judging the value of the goods and services of others relative to themselves and others.

The points can only be created and destroyed as deposits and claims, similar to tags in a baggage counter. As such, the points are not exchangeable and are not legal tender.

This service provides the following advantages:

During economic crises, the points can be used as non-interest bearing deposits of goods and services to distressed companies which those companies can return in the future when they are productive again.

For example, a soon-to-be bankrupt airline can stay afloat by getting the fuel and parts that it needs to maintain its fleet. In return, it gives flier miles to its creditors for the value of those resources. Instead of an interest rate, a direct markup is assigned.

When viewed on a macro level, the numerous loans will allow the unsold productivity of a slowing-down economy to be stored in order to avoid a crash. If ‘monetization’ speeds up an economy by converting goods and services into money through sales, then pointization is the opposite conversion of money into a promise of future resources.

On a personal level, the point-debts are implemented through Basic Universal Revenue or BUR. It will convert anyone’s productivity into points which can be exchanged for food or other basic needs.

This is similar to how the Inca established a nonmonetary economy using strings called quipu that represented an amount of food in the granary. 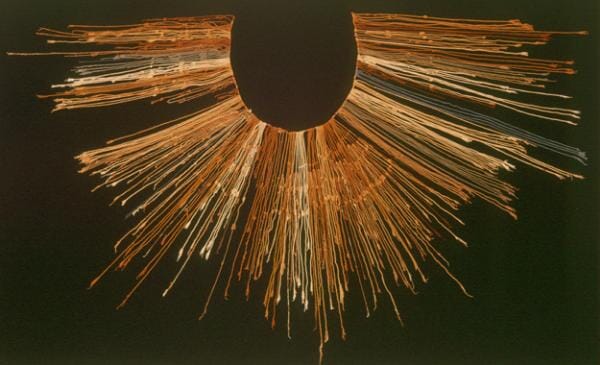 A donor can jumpstart the economy by giving food to the poor in exchange for points which the donor can claim through the labor or produce of the poor. For example, if the donor is the government, then it can provide food for the relief of the poor. The poor will then give back the points by being street sweepers or agricultural workers for the government when at their leisure.

In this way, BUR creates full employment witout being a debt-trap like microfinance nor encouraging gambling as what happens with UBI. It would also be cheaper to administer if it were done online.

A Proper Store of Value is Needed, Not Another Currency

A shallow person would likely run with this idea and create a grain-based cryptocurrency that would be convertible to a real commodity.

However, this would merely allow the hoarding of that currency just as fiat is hoarded in the current system. Such a grain-currency would merely end up creating the same poverty and inequality.

A bakery can make basic bread costing $1 each. Unemployed people can go to the bakery and claim one, giving 1 point to the bakery for each bread claimed. The bakery can then claim oven-fuel (such as gas) from the government in exchange for the points. The bakery can thus claim $1,000 worth of fuel if it gives out 1,000 bread, which it can use to bake for-profit bread to earn money. In effect:

A community pantry accepts plastic waste or compost collected by poor citizens in exchange for points. They can exchange the points for vegetables in the pantry. The waste is given then given to recyclers or urban farms who give money and vegetables to the pantry to maintain the system. In effect, the citizens barter their labor for vegetables through the pantry

BUR as a Stepping Stone to Mulitlateral Clearing and Resource Banking

But what happens when a human moves from Country A to Country B? What happens to all his points left in his country? Can these be moved with him?

BUR prevents arbitrary productivity-transfer in order to not let productivity get sucked away or be amassed by other people. This would have prevented the Asian Financial Crisis, 2008 Financial Crisis, the speculative attacks by George Soros, as well as the 2008 Food Crisis. But does this mean that foreign investments can never be made?

To answer this, we need to remember that BUR is only for basic needs such as food and healthcare (and possibly utilities). Its goal is to render as many people (and animals) productive so that they can eventually produce goods and services that go beyond the basics. As the people gain more productivity, they will naturally go outside of BUR and back into currency to buy more sophisticated goods and services.

If a person with a huge amount of BUR points in Poor Country P moves to a Rich Country R, then his points will have to be converted by an intra-national clearing system that converts the points to their proper productivity values.

*The idea for a clearing system that connects the resource banks is derived from the pool clearing proposal by EF Schumacher in 1943. The difference is that his system is ’top-down’ and uses local currencies, whereas BUR is ‘bottom-up’. In addition, our BUR-Pool system directly implements Adam Smith’s free trade system that can work with or without money, which it replaces with points. This makes it even more resilient than the version proposed by EF Schumacher.

For example, the bakery owner closes his business in Country P to move to Country R. If he has 1,000 points, then these will be converted to 900 points in Country R to help him have fuel to start his business. The 100 points lost is credited to the Point Bank who transfers his data and checks with the local government in both countries.

Superphysics
Back to how-to-solve-inequality
Next Points Banking