How to Solve Inequality

According to Socrates, inequality takes root most commonly when a society transitions from intellectual rule to an oligarchy:

An Oligarchic State is not one, but two States, the one of poor, the other of rich men. They are living on the same spot and always conspiring against one another. Their fondness for money makes them unwilling to pay taxes. Under such a constitution, the same persons have too many callings. They are husbandmen, tradesmen, warriors, all in one. It does not look well. The greatest evil of oligarchy is that it creates the extremes of great wealth and utter poverty.

In the US, this began with Reaganomics and had its peak in the boom of the late 1990’s and collapsed with the 2008 Financial Crisis.

The wealth gap rises because the upper classes earn by profits while the middle and lower classes often earn by wages. Profits are based on a percentage of the selling price or gross revenue, such as 5% commission or 10% margin. In contrast, wages are a fixed number like $10/hour or $1,000/month.

Suppliers can raise their prices bit by bit on a daily or weekly or monthly basis since they control the means of production. They only have to deal with the changes in the market demand from the changing prices.

But wages cannot rise in the same way since the employees are not in control of the finances of their own company.

When prices rise, the owners of the company still get a high revenue by jacking up selling prices, but their employees get lower revenue as it is eaten up by that very inflation. Also, employees must pay income taxes that eat up their revenue, but company owners can do creative accounting (tax avoidance) to prevent this from eating their profits. In time, the differences in revenue lead to a wealth gap.

The Solution to Inequality

The root cause of inequality is the difference in the nature of rent, wages, and profits.

Monetary solutions to inequality, such as universal basic income and quantitative easing, can never solve it because it does not address the fundamental differences between those three revenues. 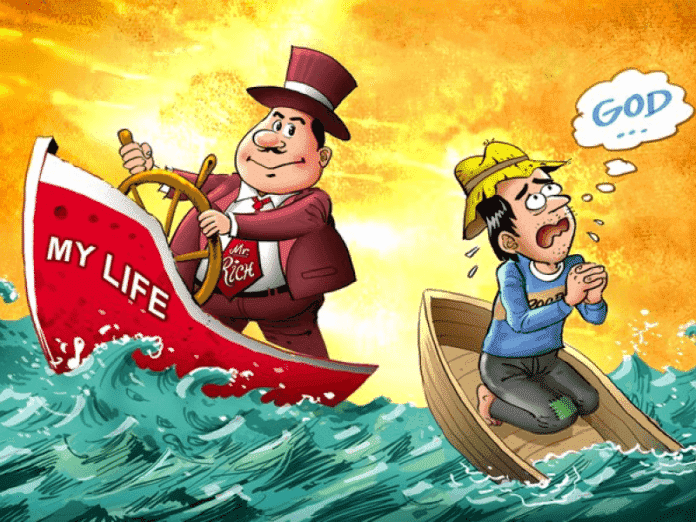 The proper solution is fiscal and structural reform.

Taxing gains can reduce profits to match it better with wages. Property taxes can equalize wealth as well. This is why Piketty advocates a global wealth tax .

However, a tax is a negative action which can be stifle growth. To address this, we propose social points as a positive action against inequality .

While taxation is an active solution to inequality, structural reform is a passive solution. Examples are:

These will encourage freelancing and online businesses where everyone can be their own boss and earn profit instead of wages.

Superphysics
Back to Basic Universal Revenue
Next how-to-prevent-stagnation